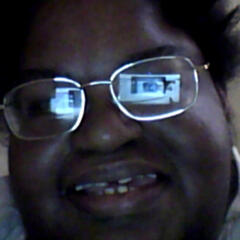 I was born November 15th,1979 in Evanston,ohio(cincinnati).An only child to Woodrow Wilson Johnson and Joan Frances Webster;Trinette was born to be a wonder to the eye! Weighing at 7 pounds and 14 ounces at birth,noone knew she'd be different.
"I looked like a small blasian baby",says Trinette. "Noone knew I'd be this big fat freak of a girl. That people would taunt me."

Today Trinette is aged 40 and has grown into a nice young woman. She struggles with her disabilities,but has survived the hardship. She suffers from morbid obessidy,mental illness,autism,anemia,CFS,nervous disorder like epilepsy,and even COPD. "It's been hard. very hard for me to do things that others do. Most people take these things for granted."

Trinette has an education from many schools and programs including elementary from both Saint Frances Desales and Hoffman magnet school in Cincinnati. To an online diploma from Missionary Chapel And Seminary. She even is an alumni at Devry University and WGU respectfully. She enrolled but never finished her degree there. "My mind just isn't set on finishing it. I'd rather just have my diploma from a school or program."

Trinette also often uses her phone and tablet to create beats and music for her online Soundcloud and Twitter page. Using the name Skullkizz! She makes mixes and beats using the software called Music Maker Jam! She has made a name for herself as an online recording artist and even as a poet with her own book of poetry thru Amazon. She is a self published freelance writer and poet as well.

Trinette weighs in at 423 pounds and was once one of the fattest kids in the world at age 5! She weighed in at 165 pounds and was 5 feet 1 at that age! The teachers at her school thought she was a midget;not a little girl. And in the 6th grade at age 13,she weighed in at almost 258 pounds! "I've always been really fat. I don't eat alot. I'm just big. Sometimes I even puke my food up. I get nervous alot. "

Trinette has a biracial DNA heritage like most people. She is only 62 percent black! The rest of her DNA is white and a mixture of Native American and Spanish bloods. "I'm a mixed race person. I don't identify myself as fully black! I never did. Even if I look it."

Trinette is special and that's what she always will be! :)